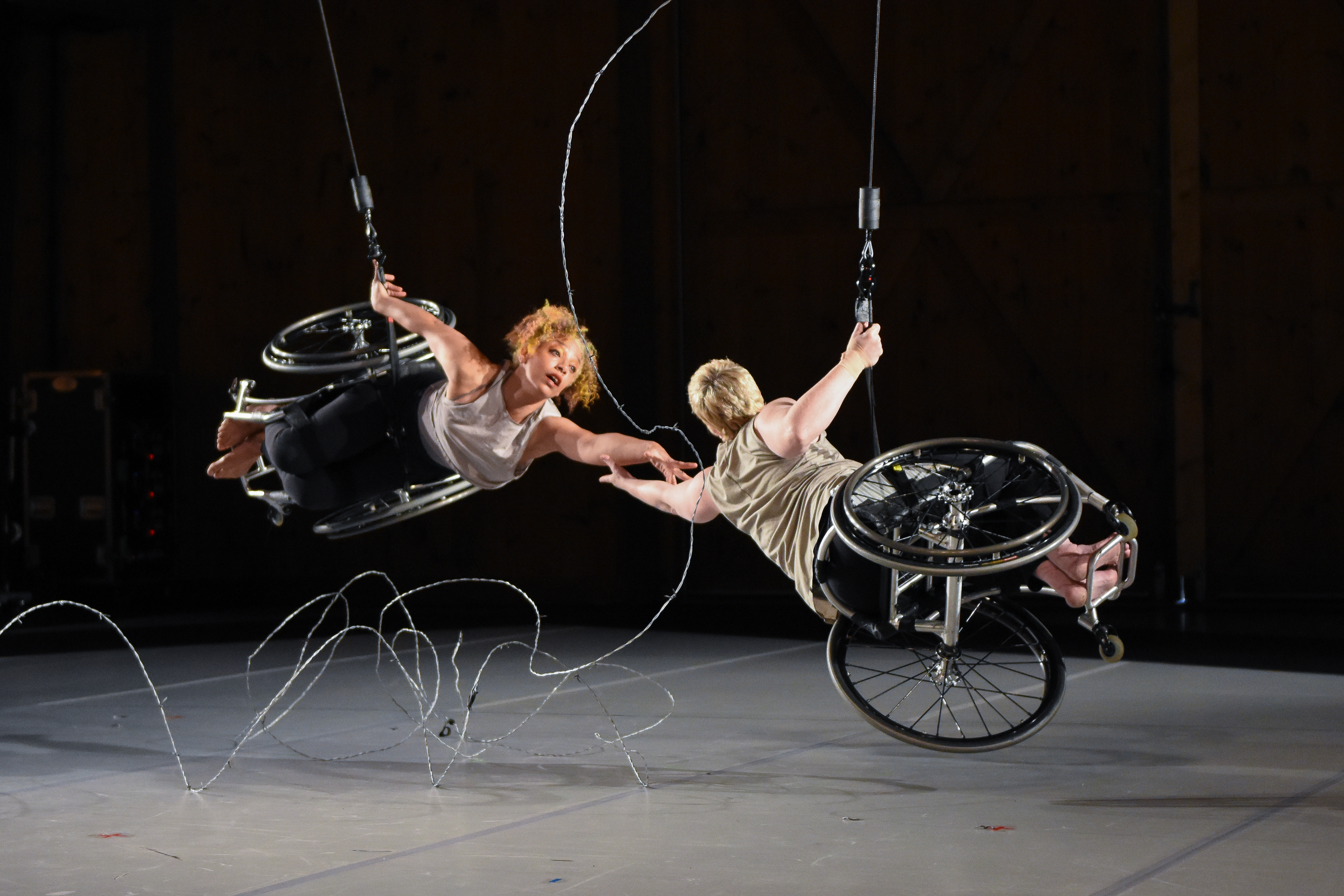 Alice, a dancer with light brown skin and short curly hair, and Laurel, a dancer with pale skin and close-cropped blonde hair, hang from the ceiling. They each have one hand on a cable as they reach for each other with the other. They are nearly horizontal and their legs and feet face out. Silver barbed wire stretches between and beneath them, against the black backdrop.
Making Wired

I am honoured to welcome you to Wired.

Tonightâs performance is the culmination of many artistsâ brilliance, passion, commitment, and work. After some experimental residencies at New York Live Arts and Jacobâs Pillow, the majority of Wired was built in 2020-2021, in a bubble residency in the San Francisco Bay Area at Z Space theater. In the shelter of this generative space, we lived together, on and off, for almost a year, and we made a work that I believe is transformative.

Wired honours the race, disability, and gender stories of barbed wire in the United States. Wired began when I rounded a corner in the Whitney Museum of Modern Art; I took in Melvin Edwardsâ sculpture Pyramid Up and Down Pyramid.Â  This graceful, gut-wrenching piece changed my world. I wanted to get closer to the wire itself.

Barbed wire is a consistent, yet sometimes invisible part of our lives. Urban, suburban, and rural; barbed wire defines borders and outlines so many territories, literal and figurative. In 2019, the wire resonated as we struggled with so many images of prisons, residential institutions, and detention centers. In 2020, as the U.S. witnessed an uprising against police brutality, more images of barbed wire circulated in our media.

Wired is the companyâs first aerial work. Learning to fly has been a joyful and, yes, sometimes terrifying experience. The engineering and technical know-how necessary for a show like this is staggering, and throughout the process weâve been supported by some of the fieldâs most experienced professionals. Thank you to our rigging consultants and automation operators for keeping us safe!

The work you will experience here emerges from the hearts and minds of many artists. In addition to the Kinetic Light artistsâJerron Herman, Laurel Lawson, Michael Maag, and myselfâ two composers, LeahAnn âLafemmebearâ Mitchell and AilÃ­s NÃ­ RiaÃ­n, wrote the scores. Josephine Shokrian designed the sculpture pieces and the barbed wire props that encircle both bodies and set. If you are listening to Wired audio description, you are experiencing the art of Shannon Finnegan, Cheryl Green, Dylan Keefe, Leah Lakshmi Piepzna-Samarasinha, Andy Slater, and Mo Pickering-Symes. I am incredibly grateful for these collaborators and their integral contributions.

A world has grown up around Wired. I am delighted to invite you in.Â  Welcome.

Wired began when choreographer and Kinetic Light Artistic Director Alice Sheppard turned a corner in the Whitney Museum of Modern Art and saw Melvin Edwardsâ sculpture Pyramid Up and Down Pyramid.

Melvin Edwards is most widely known for his Lynch Fragments series and barbed wire sculptures. You can learn a little about the history and context of these pieces in an essay by Greg Cook, for the exhibit Wonderland, here. Edwards is an innovative African American contemporary artist and sculptor with a transformative legacy. Learn more about him in his own words here in an interview with BOMB Magazine.

In the turbulence of New Yorkâs art world and the United States fight for civil rights, Edwardsâ 1970 show at the Whitney Museum of Modern Art was the first solo exhibition by a Black artist there. Pyramid Up and Down Pyramid (first seen as X to The Fourth Power at the Studio Museum in 1969) was included in this exhibition. Edwardsâ artist statement for the exhibition reads, in part:Â

The show landed in the midst of significant and necessary cultural challenge by artists and activists. In 1968, the Black Emergency Cultural Coalition protested the Whitneyâs survey exhibition of American art: no Black artists had been included, despite the fact that Edwards and other artists had worked with the museum and sent recommendations. In 1971, Edwards withdrew from the Whitneyâs new exhibition, Contemporary Black Artists in America, after the museum chose a white curator.Â

Edwardsâ work also challenged some of the fieldwide conversations about abstraction, minimalism, form, and identity. You can learn more about this here, in a conversation between Melvin Edwards, Sam Gilliam, and William T. Williams (audio only; no transcript). In an interview with BOMB Magazine, Edwards commented:

One of my discussions within the [B]lack art community was with people who said, âAbstraction canât be black.â Well, I donât know why not. It always was. Besides, we do new and experimental stuff with music, with any number of other things. Why not with art? I realized I was talking to people who hadnât played with those thoughts much. A lot of people were culturally progressive, but they were rooted in the politics of social realism, coming out of the â30s, and they figured, well, if youâre going to be black and radical, it ought to be a certain way. I said, âItâs fine if it is that way, but there are other ways to develop it.â

Pyramid was accessioned by the Whitney in 1969.Â  It was rebuilt for the Whitneyâs Incomplete History of Protest in 2019 (where Alice first saw it). Edwards writes of his decision to work in barbed wire and other such materials,

I have always understood the brutalist connotations inherent in materials like barbed wire and links of chain and my creative thoughts have always anticipated the beauty of utilizing that necessary complexity which arises from the use of these materials in what could be called a straight formalist style. The Afro-American Artist: a Search For Identity. (1973)

Barbed wire is a complex material. We think we know what it is and what it does. But Edwards challenges us to think differently. In this interview for the Columbus Museum of Art, Edwards provokes his audience:

As an artist Iâm transposing the notion of materials and what they mean, or playing with them, because thatâs what poets do, thatâs what writers do.

Melvin Edwards and other Artists on Abstraction

Jennifer Poleon on Melvin Edwards for the Columbus Museum

The following is not a complete history of barbed wire, but it does share some historical touchpoints that are relevant for Wired.

There are several early instances of wire fencing and barbed wire in the United States and abroad. For example, some of the early inventors are Alphonso Dabb, Lucien B, Smith, and William D. Hunt. And a wealth of wire fencing and barb patents were filed in the mid to late nineteenth century. But on the basis of a lawsuit that went all the way to the Supreme Court, Joseph Glidden, a farmer from Illinois, is often named as the âinventorâ of barbed wire.Â Â

DeKalb, Illinois is one of several geographic centers of American barbed wire history.Â  Gliddenâs barbs are sometimes described as an improvement over the work of fellow DeKalb farmer, Henry Rose, and a solution to the problems of the variants by such inventors as Michael Kelly (also from DeKalb).

Glidden received his patent in 1874 and went on to form the Barb Fence Company with Isaac Ellwood, a DeKalb hardware dealer. Two years later, Glidden sold his half of the company interest to the Washburn and Moen Company of Worcester, Massachusetts. In 1898, Ellwood sold this business to John W. Gates, helping to create the American Steel and Wire Company.

A fourth member of this DeKalb group of barbed wire businessmen is inventor Jacob Haish. Haish successfully patented a new kind of barb that both secured his financial success and brought him into conflict with Glidden. Haish ultimately lost his claim and was not included in the Barb Fence Company. Â Â

The Glidden Homestead and Ellwood House are now museums in DeKalb. The Haish mansion was destroyed due to a lack of maintenance by subsequent, non Haish family owners.

The nexus of barbed wire businesses in this one Illinois town has given rise to a series of legends reflecting the steep competition to profit from and control the manufacturing of barbed wire. For example, Ellwoodâs wife, Harriet, is rumored to have claimed that she thought Gliddenâs wire was better than her husbandâs.Â  Glidden is supposed to have used the hairpins of his wife, Lucinda, as inspiration for his barbs. Some of these stories are reflected in Wired.